Benchrest shooting secrets from the annals of PRECISION SHOOTING – AUGUST 2009

The following article, highlighting the benchrest shooting secrets of Tony and Faye Boyer, is reprinted from the August 2009 issue of PRECISION SHOOTING magazine.

The 2009 Super Shoot is now history and during this event, history was made. Tony Boyer won the two-gun for an unprecedented fifth time. He and Don Geraci had been tied with four victories each before this year's event.

The interview was done prior to the beginning of the competition, but I had a feeling that Tony was hungry for the fifth victory.

Faye Boyer is the only female member in the Benchrest Hall of Fame. This attests to her tremendous skill as a Benchrest shooter. She along with Allen Arnette and Wayne Campbell, earned Hall of Fame honors with Tony as a mentor.

Tony told me that he has no secrets, but he sure has methods that seem to improve the ability of those who he teaches.

END_OF_DOCUMENT_TOKEN_TO_BE_REPLACED 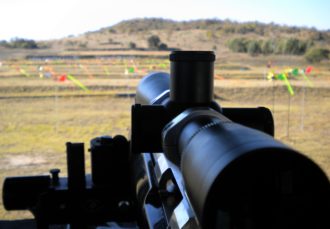